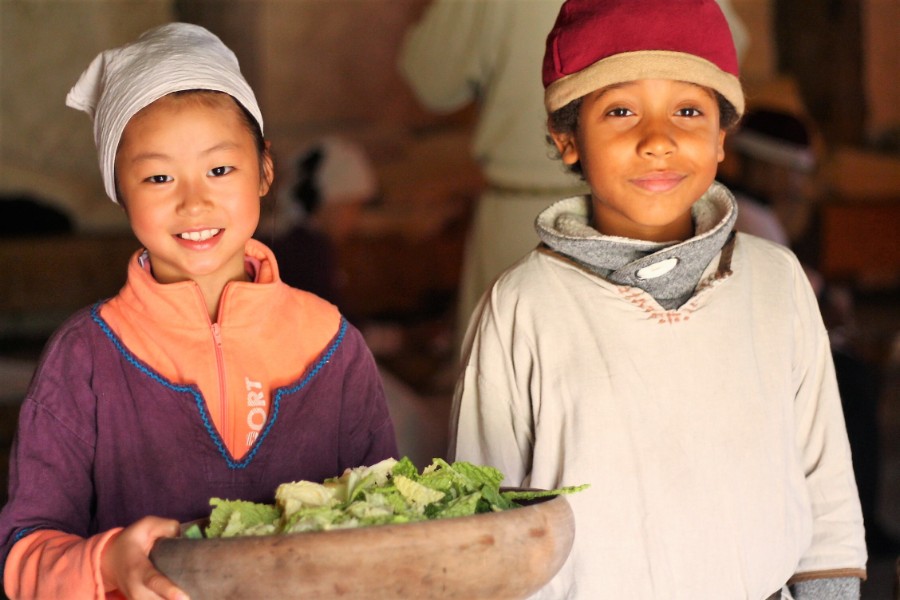 Children from year 4 enjoyed an unforgettable school trip this week to the Ancient Technology Centre in Dorset to experience life as a viking! The children took part in a range of immersive educational activities including grinding flour and making bread, picking vegetables and chopping them into a stew, and making their own cheese and butter. And that was just in the morning! In the afternoon children made bricks from chalk, chopped wood, tended the vegetable garden and played viking games. The children lived and slept in a viking long house, enjoyed stories and songs around the fire and thoroughly enjoyed themselves from start to finish. The children will return to school next week full of inspiration and knowledge. Thank you to the children for behaving so well and to the adults who volunteered their time to make the trip possible. 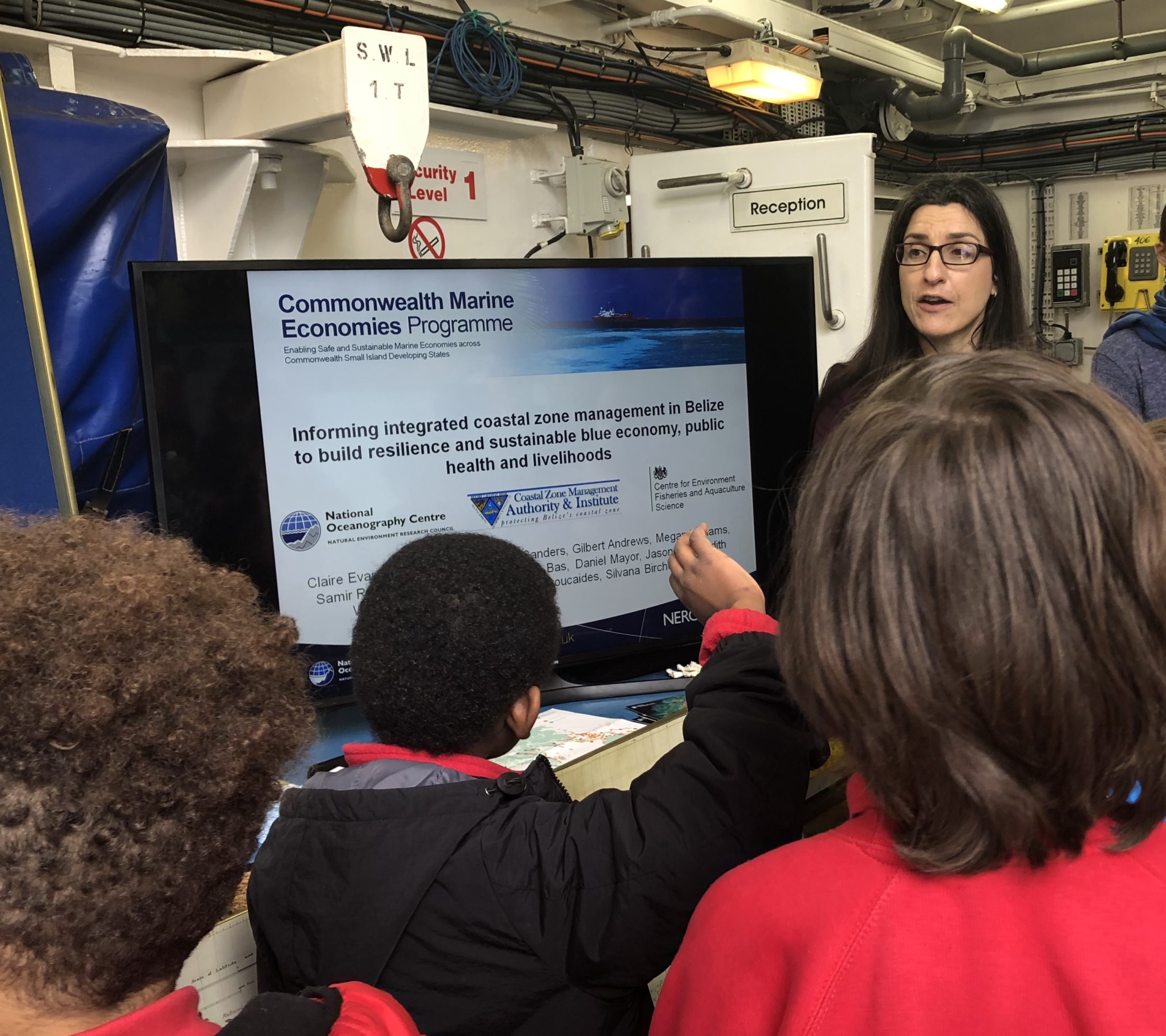 This week, pupils from year 6 have taught by the scientists and crew of RV Endeavor and they learnt an unbelievable amount about oceans and the life within them.

As part of Commonwealth Week, we were invited on board RV Endeavor, the ocean-going fisheries research vessel which is operated by the Centre for Environment, Fisheries and Aquaculture Science (Cefas).

They learnt just that as human populations increase and the negative effects on the marine environment also increase, never has there been a more crucial time for society to understand the science of our oceans. This knowledge and understanding of our ocean can be termed ’ocean literacy’.

In just two days, they learnt how the ocean and life in the ocean shape the features of Earth and the weather experienced. Pupils also learnt about the diversity of life within the oceans including the Carribean Spiny Lobster ( our favourite).

Most importantly, we learnt that oceans and humans are inextricably linked and there is so much more we can do to protect these amazing and enormous parts of our world!

Thank you to everyone at CEFAS for such a brilliant experience.

A huge thank you to all the children involved in meeting our green flag assessor this morning.
She was very impressed by the eco-code song that was sung in assembly today and enjoyed touring the school to admire our: recycling efforts, musical instruments made from recycled materials and displays about keeping healthy. Isabella explained why we chose to get a worm bin, “so we can turn our compost into soil more quickly”. Jake and Sabrin spoke about ecological travel and how they have been encouraging people to walk to school. Tahir spoke about the planting he did in gardening club last year, while Elisha spoke about composting and the class rabbit. Joseph talked about our science walks. Elisha added that in her class children use scrap paper to make things with or draw on.

Thanks to everybody’s hard work in showing care and concern for the environment we have been awarded our green flag again!

A special well done to Mrs Jamois who leads our eco team, manages our garden including gardening club and also the junior travel ambassadors – her passion for the environment and living in harmony with nature is inspiring us all!

This 2015 we are lucky enough to get an eclipse in UK . We do have a very bad weather of corse, but there are still many ways to get a good view of the eclipse so don’t worry. For those who are not  familiar with the eclipse, it’s when the moon moves across the face of the sun and from our view on earth, it’s as if the sun turns into the moon and eventually we get a waxing gibbous and then it decreases. There is an hundred percent eclipse in Farouqe Island.

The eclipse is mostly in smaller countries meaning they get a better view. During an eclipse in the day it gets darker and darker and after the eclipse the sun will transform into a full sun. When we see the total eclipse the moon will turn into the dimond ring. A long time ago, there was a rumour in China that a dragon was eating the sun. But that was not true. Why is it darker than usual? Because moon covers the sun. The solar eclipse occurs when the moon gets between the sun and the earth. The next solar eclipse will be in 2026 but the next total eclipse will be in 2090!!  Jane and Kaiya

9:42 the sun was completely blocked by the moon. The Sun turned red as the moon was still blocking the Sun

9:44 the sun had a huge flash then the flash disappeared in a shock.  By Idriz and Tarisai

9.36: Today (20th March 2015) on the Faroe Islands the will be a total eclipse in 100%! As the eclipse occurs the sun wil have its light completely blocked out. The reason it happens is ,amazingly ,a coincidence that the sun and moon are at the same place at the same time. The solar eclipse is when you only see a crescent of the sun because the moon block’s most of it. When the moon fully covers the sun everyone will be able to take off their glasses and have a look it will be amazing! There are lots of myths about the eclipse ,most to do with being eaten. In England now at 9:35 it has reached the darkest it can be.In space there will be a dark shadow. By Charlie, Tomiwa and Ruben

9.29: This morning, we are watching the live solar eclipse! Today is the 20th of march 2015. The Faroe Islands and around north Scotland will have a total solar eclipse which occurs rarely. Its certainly is a once in a life time chance to be flying above the Faroe Islands at about 28000 feet. In a few million years, there will be no solar eclipses because every year the moon is going 4cm away from us, the earth. Sadly from our point of view, its too cloudy so we can’t see the sun. in Charles Dickens Primary School in London. By Elyab and Louis

Our thanks goes out to Mr Oxenham for arranging and leading a truly inspirational Science week!

One of the highlights was the talented Anna and her “Street Science Show”. The children saw some amazing tricks and learnt about the science behind them.

A personal favourite was seeing Miss Carver pull a table cloth from a table without removing any of the teapots or plates from the table first. (Don’t try that at home!)

This week, I was amazed to see expert coding taking place in the reception classes. All of the children were taught how to use codes in order to animate a character of their choice. The children confidently used codes to make the character move up, down, do turns and even speak!

Well done Little Dorrit and Gargery and I can’t wait to see what you achieve next week.

This week has been science week and we have had so much fun! Key Stage Two have been visited by inspirational scientists and taken part in hands-on science workshops.
Key Stage One have all visited “Tower Bridge Experience” to learn about the amazing engineers who helped create a bridge with lifting bascules. This was an amazing challenge at the time.
All classes have taken part in an hour of code, where they learnt about the importance of coding computers. Did you know that without computer programmers we wouldn’t have modern airlines, spaceships and so many other things that we take for granted?
I have just witnessed Early Years being treated to a special “Street Science Show” where the children were able to witness, and take part in, scientific experiments which they could try at home.
I can’t wait to see what else lies in store for us as we enter the final day of our Spectacular Science week!

The Trotwood children have been learning about mini-beasts and today their learning was celebrated and enhanced with dressing up as mini-beasts, making and more importantly eating ‘bug food’ and dancing like no caterpillars, ladybirds or indeed spiders have managed to dance before!

Reception held an Ugly Bug Ball at Highgate Woods as a grand finale to their learning about mini beasts. They explored different habitats (the woods and field), held a ball in the trees, built dens in the undergrowth, enjoyed the vast open space and developed their climbing skills in the adventure playground. Thank you to all the parent helpers for making the trip so successful.

Children in Gargery, Little Dorrit and Trotwood were treated to an experience they won’t forget in a hurry today when the Zoo Lab brought their creatures to visit. The children have been learning about min beasts this half term (they will be looking at larger creatures after half term) and today they got to meet both types first hand. They got to hold millipedes, bugs, a rat and a corn snake called Daisy! They got to see scorpions and tarantulas too but not to hold them. They all acted so sensibly around these wonderful and beautiful creatures. Thank you Zoo Lab.